It’s pointless me warbling on about how much I love Jurassic Park – I think anyone who was aged between probably 7 and 16 when the first movie came out in 1993 probably holds it somewhere close to their heart. It is hands down my favourite film, and always has been. Dinosaurs and cinema have always been catnip to me. One of my other favourite films as a kid was Valley Of The Gwangi (1969), which features awesome stop-motion dinosaurs versus cowboys. So when Jurassic Park came out, and fused the modern world with dinosaurs in such a dramatic and realistic way, I was blown away. As the trailer was released for Jurassic World, or Jurassic Park 4, I was desperate to be excited by it and not have my fantastic memories dragged deeper into the commercial cesspit of sequeldom.

Today, I am delighted. My inner 10 year old is electrified. There is so much I love about it.

Family. Jurassic Park films are always a family affair, and they are placed front and centre of the trailer. And the little prophetic line Judy Greer gives the kids? Wonderful. The park itself… this place is fully operational! All those nights lying in bed staring at the ceiling wondering all the what ifs proposed by the setup of the first film, had at all not gone so spectacularly awry. I can now see it – it is massive, commercial and living. All what I dreamed. This appeals greatly to the kayaking enthusiast in me, but doesn’t that look just gorgeous? Floating down the river like in some cotton-wool Lost World. It’s a beautiful image, that harks back to pure fantasy.

The films are famous for jaw-dropping moments, and such are the advancements of visual effects that I find such moments fewer and further between these days, but here is the build up to one that genuinely took my breath away…

And I’m almost destroyed now. It’s just awesome. All the little details are so great – the shark as bait, the Sea World style show and amphitheatre, the baying crowd. It’s the park come to life in ways I’d never even dreamed. Giddy.

Then we get some flavour of character and story, and here comes Chris Pratt and Bryce Dallas Howard. Turns out she has been tinkering with something in the lab, some genetically modified dinosaur that’s even more genetically modified than the one’s they have already created. People seem to have a problem with this, and I can’t for the life of me understand why. It stands to reason entirely that these scientists can add a little extra DNA in where they see fit in the dinos’ creation because THAT’S WHAT THEY DID IN THE FIRST PLACE. They used frog DNA to bridge the gene sequence gaps in the first movie to even get the dinosaurs built. I’m absolutely no pedant whatsoever when it comes to these things, because it makes absolute sense as a progression. Further to this, Crichton actually made this happen in his Jurassic Park sequel, The Lost World – so much so that he even made them fused with chameleon DNA, which resulted in them being able to change skin tone to match their environment. the Jurassic Park world requires a suspension of belief in the first place, so if you are suddenly balking at the idea of them creating new dinosaurs with the DNA they have available, then maybe these movies, or perhaps fiction at all, is not for you. Have some fun and go with the story, please!

Slight little side note also – Chris Pratt is going to own this film. Just own it. Oh dear. Seems something got out that perhaps shouldn’t, and it seems to be the big genetically modified dino they were talking about. That up there is the remains of one of the gyrospheres that tourists were rolling around in earlier in the trailer. Heaven knows what fun the filmmakers will have had with staging an action sequence involving one of those. 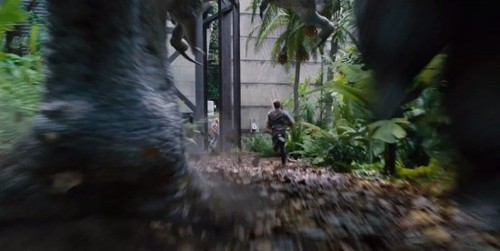 And it’s going really wrong now, as Chris Pratt is finding out the hard way. Running from big fast things with sharp teeth is always fun in the movies, and here looks no exception.

Man, I love this. This is one big fat nod/homage to the the first film and Ian Malcolm. On following the production of this film, the director Colin Trevorrow seems so conscious of the legacy he is taking on, and so respectful of both the source material and the fans of the series. On seeing the above image, all fears were put to bed. 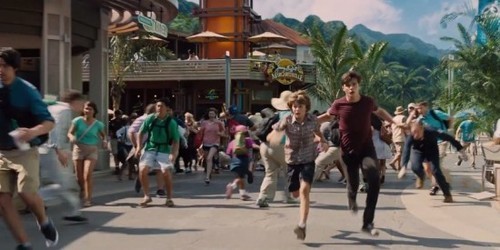 Agh! Everybody run! The park is in meltdown – yes! Yes! Dreams fulfilled left, right and centre.

The trailer closes with the above image, of Chris Pratt riding off into the night, tooled up on some awesome motorcycle, alongside a pack of raptors – wait, WHAT!?

This seems to have caused a lot of controversy, for a myriad of different reasons. I say, screw that, this is GENIUS. I’m sold, I’m all in.

Why are people upset? Well, I think a lot of this is down to the success of their portrayal as intelligent, dextrous, frightening killers in the first three films of the series. They were TERRIFYING. And what better way to subvert that than to throw something new in there.

Again, this is not new in any way, in official cannon terms. The official comic book continuation had raptors being trained, so it’s not like this is some totally new outrageous idea. And again, it is surely about progression, and what could be deemed as acceptable and not. This is a film that is essentially in a pseudo-fantasy universe – it has grounds in reality, and science to a certain extent, and for it to work requires that same old suspension of disbelief we’ve already discussed. Surely, if they can build dinosaurs, they can try to train them, right? And who says it was successful? It looks OK up there, but what happens later?

Regarding the context of all of the above, we know so little – so it is surely far too early to judge. But there are enough fresh ideas to the fore here, that I find myself hugely excited. Roll on June.